Why Greenland is Melting 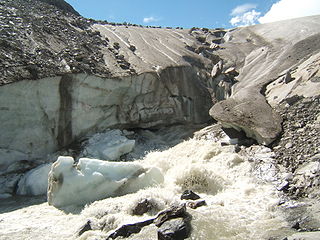 Well, we know the answer, it’s climate change. But, what exactly, is causing the record breaking events in the past few years, such as the 2012 Watson River (Akuliarusiarsuup Kuua) event, where the bridge got washed away?

The mechanism (and here is where I apologize to arctic climatologists for the comparison) is much like what we see on glaciers. Many of them are dirt/debris covered, and while darkening mechanisms may differ from Greenland, the net effect is the same: Dark surfaces heat up a lot more under sunlight than bright white, freshly snow covered surfaces. Halfway between is melting snow, which changes its crystal structure, but also is much darker than fresh snow.

So, to get record breaking melt events, here is the recipe for disaster for Greenland:

You can get a feel for this using the app below, which takes PromICE data, and displays a relevant subset of it (altitudes up to 1500 m), binned in hex form (using Uber’s h3 library) showing areas of fresh, white snow, darker, wet snow, and dark bare ice regions. You can tell that, around the time when the Watson River bridge got washed away, Greenland was, actually, Greyland (play with the dates, set it to June 1, June 30, then May and September).

Make sure you also check “how to use this page”.

No comments to show.

We use cookies on our website to give you the most relevant experience by remembering your preferences and repeat visits. By clicking “Accept”, you consent to the use of ALL the cookies, which we really don't use for any other purpose than securing this site.
Do not sell my personal information.
Cookie SettingsAccept
Manage consent

This website uses cookies to improve your experience while you navigate through the website. Out of these, the cookies that are categorized as necessary are stored on your browser as they are essential for the working of basic functionalities of the website. We also use third-party cookies that help us analyze and understand how you use this website. These cookies will be stored in your browser only with your consent. You also have the option to opt-out of these cookies. But opting out of some of these cookies may affect your browsing experience.
Necessary Always Enabled
Necessary cookies are absolutely essential for the website to function properly. These cookies ensure basic functionalities and security features of the website, anonymously.
Functional
Functional cookies help to perform certain functionalities like sharing the content of the website on social media platforms, collect feedbacks, and other third-party features.
Performance
Performance cookies are used to understand and analyze the key performance indexes of the website which helps in delivering a better user experience for the visitors.
SAVE & ACCEPT